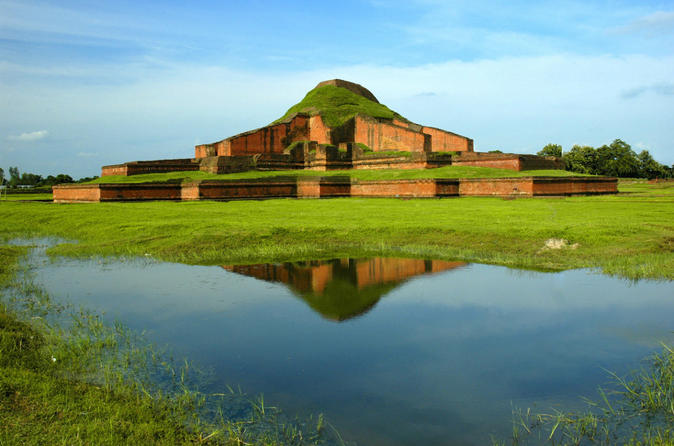 After breakfast at 8am your first stop will be Ramsagar National Park and Ramsagar Lake which is the biggest excavated pond of Bangladesh.King Ramnath excavated this pond during the reign of Nawab Alivardi Khan.This pond was excavated to remove the scarcity of water of the local inhabitants.Next, you’ll proceed to Kantajew Temple.The most ornate among the late medieval Hindu temples of Bangladesh Kantajew Temple was built by Maharaja Pran Nath in 1752.Head over to Nayabad Mosque.The mosque was constructed in 1793 AD during the reign of Mughal emperor Shah Alam II.After lunch start for Ruins of the Buddhist Vihara at Paharpur.Visit Somapur Mahavihara which was once a renowned intellectual centre until its demise in the 12th Century AD.By evening transfer to Bogra hotel for overnight stay.

After breakfast at 8am start for Kusumba Mosque at Naogaon.This mosque is one of the best preserved ancient monuments of Bangladesh.According to an inscription it was erected by a patron Sulayman in 1558 during the reign of Ghiyath al-Din Bahadur Shah.After lunch start for Chhoto Sona Mosque in Chapai Nawabganj.At the reign of Sultan Hossain Shah (1493-1519),this Mosque was built by Wali Muhammad son. Then visit Tahkhana Complex, Tohakhana Masjid.After visiting Darasbari Mosque and Chika Mosque transfer to Rajshahi hotel for overnight stay.

After breakfast at 8am visit Varendra Research Museum.This was the first museum of Bangladesh.This museum has a rich and ancient collection,almost three thousands of objects of Paharpur,Mohasthangar and Mohenjodaro and also of 16th to 19th century A.D.Next you’ll start for Puthia Temple Complex.Here you’ll visit The Shiva Temple,Jagannath Temple,Dol Mandir,The Puthia Rajbari or Palace of the Raja of Puthia,Pancharatna Gobinda Temple and Bara Ahnik Mandir.After lunch start for Bagha Mosque.It is the Shahi (grand) mosque of Bagha,the most beautifully decorated mosque built in the independent sultanate period of Bengal by Nasrat Shah,the Sultan of independent Bengal,in 1523-24,the mosque is well known for its depiction on the banknote of fifty taka.By evening you’ll start for Dhaka.At approximately 11.00 pm, we’ll drop off you at your Dhaka hotel where the tour will end.

You can present either a paper or an electronic voucher for this activity. What’s this?

Complete Operator information, including local telephone numbers at your destination, are included on your Confirmation Voucher. Our Product Managers select only the most experienced and reliable operators in each destination, removing the guesswork for you, and ensuring your peace of mind.

Click the link below to check pricing & availability on your preferred travel date. Our pricing is constantly updated to ensure you always receive the lowest price possible – we 100% guarantee it. Your currency is set to USD.